In only six months after the Uganda Netball Federation (UNF) elective assembly ushered a new executive on a four year tenure, there has emerged a bitter split amongst the new leaders.

The wrangles that flared up before a year in office stem from numerous dissent on matters of accountability, scorn and egotism amongst the executive members

She beat two other candidates collecting 184 votes, Joselyn Uchanda (41) and Christine Nampijja (5) during an elective general assembly held at the Lugogo indoor stadium.

However, the unity, love, joy and happiness manifested during campaigns and elections have been momentary as egotism, betrayal, lack of accountability and supplicatory rule has flared up a huge split within the team.

Betrayal. Its alleged Muhumuza and Mande were plotting for an overthrow of the president in the proposed Extra General Assembly.

The split started with the suspension of the publicity Secretary, Yahaya Ssengabi after a series of intricate scenes with the planning and organizing committee Member in Fred Mutengeesa.

The antagonistic situation between the two brought about a rough exchange which later resulted into suspension.

What Sparked off the scuffle?

On 23rd December 2021, the general Secretary in Aminah Mande wrote a letter to all executive committee members and regional representatives calling for meeting on 7th January 2022.

On the menu card, discussing about the issues of the booted Vice president technical Richard Muhumuza, mismanagement of the federation activities, and Yahaya Ssengabi’s suspension.

However, two important hidden agenda of the day were overthrowing the president and questioning the President about why the federation funds being spent on his boylover/husband Daniel Ntale’s travels who isn’t an executive committee member.

However, nepotism and love blindfolded the president Sarah Babirye Kityo to award her lover bird Ntale a position on the committee for marketing. This position won Ntale a trip to Windhoek, a Namibian capital for Pent series and Africa netball championships held in November.

His travel to Namibia was not stomached by some of executive members and to them, spending on him was topical extravagance and corruption.

On release of the letter, the president and her loyalists sighted overlook of constructional powers as the general secretary Aminah Mande failed to knowledge the top office for approval as provided in the constitution.

The executive committee banne and replaced Richard Muhumuza (VP Technical) and treasurer Mande who looked for justice from courts of law which is contrary to the UNF constitution. 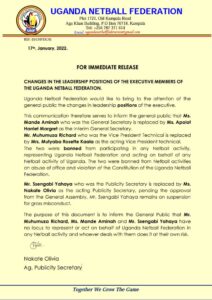 However, the executive also over-looked the constitutional powers to replace the banned members without the approval of the General assembly.

The ban stumbles the two from participating in any netball activity, representing UNF and acting on its behalf in anyway.

World Netball: She Cranes to face Wales in the Vitality International test series